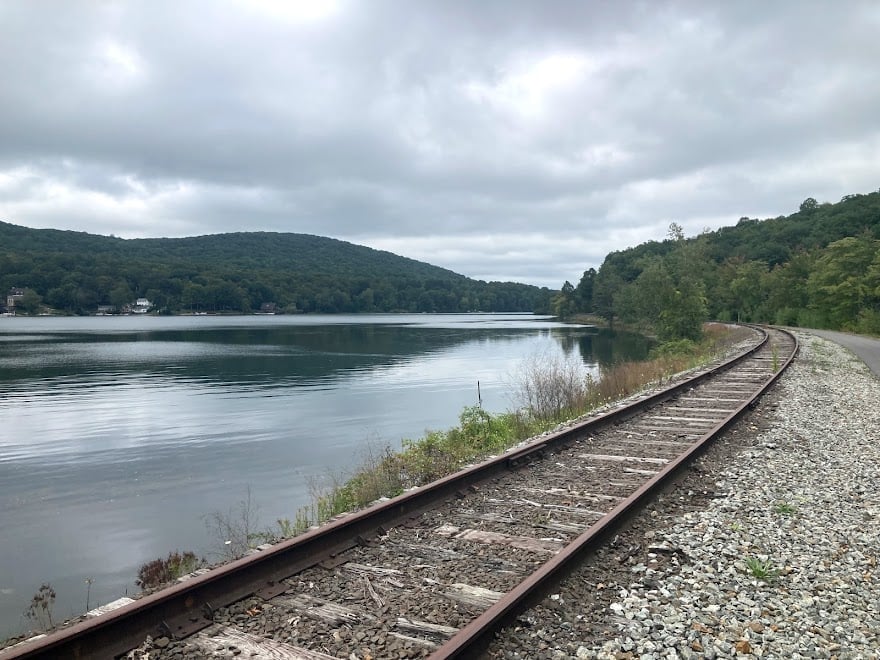 ‘Are e-bikes allowed?’ 5 things to know about the Empire State Trail

As the nation’s longest multi-use trail, the Empire State Trail traverses more than 20 counties across the state and has established itself as a recreational gem. It was named America’s Best Rail Trail by Outside Magazine in 2022, beating well-known trails like the Moab Canyon Trail and a 180-mile route from Grand Teton to Yellowstone National Park.

Opened in December 2020, the Empire State Trail had been under construction since 2017, conceptualized as a way to promote outdoor recreation, support community vitality, and enhance tourism-related economic development. The completed trail network connected 400 miles of previously existing but disconnected trails while propelling the completion of over 180 miles of new off-road trails. About three-quarters of the 750-mile trail is off-road, easing road traffic issues for wayward pedestrians or cyclists.

Where does the Empire State Trail start and end and how long is it?

It is therefore possible to walk the trail from New York to Canada and/or Buffalo.

Cyclists, runners and walkers can access the trail at any time and move in any direction, creating endless access and starting points. Many points along the trail are also convenient for public transportation, especially between New York and Albany.

Are e-bikes, pets and horses allowed on the Empire State Trail?

More electric bikes are permitted on various sections of the trail except for Class 3 e-bikes, which can reach a maximum pedal-assisted speed of 28 miles per hour and are only permitted in parts of New York but not on the trail.

The Class 1 e-bike is a pedal-assist model that gives riders a boost up to 20 mph and is licensed more widely. The Class 2 type is a throttle-assisted e-bike that can propel riders without pedaling up to speeds of 20 mph. The latter is useful for propelling cyclists up difficult hills, for example.

The rules on electric bikes are changing. Certain sections of the Empire State Trail fall under the oversight of local governments to enact policies and, where none are explicitly in place, e-bikes – with the exception of Class 3 bikes – are neither explicitly permitted nor prohibited.

Here is a breakdown of the e-bike rules:

Dogs are allowed on most trail segments, but must always be controlled and kept on a leash.

The path does not allow horsesexcept for a segment that runs through Old Erie Canal State Park.

Related: Cycling on the bucket list: New York to Albany along the Empire State Trail

How long would it take to walk or bike the entire Empire State Trail?

from buffalo Ken Burke completed 565 miles of the trail from Battery Park to Buffalo on foot in less than 12 days, averaging more than 80 km per day. He accomplished the feat in 11 days, 16 hours and 35 minutes, pushing a stroller with food and supplies. In April 2021, Connecticut Jeremy Chapman took seven days to cycle the entire trailbeat blizzards and punctures, the Sun Journal reported.

Recreational cyclists on multi-day trips typically ride between 30 and 50 miles per day, but that ultimately depends on the individual riders. For those planning a multi-day trek on the trail, careful planning is advised to avoid being stranded away from food, water, and overnight accommodation.

Related: A man sets off on a charity run from Buffalo to New York along the Empire State Trail

How hilly is the Empire State Trail?

The long trail traverses a range of landscapes and terrains, along lakes and rivers and through busier towns like Kingston and Hudson. Some passages are also hilly.

The maximum elevation along the Hudson Valley Greenway Trail, which experiences elevation changes everywhere, is 800 feet for a small portion of the Maybrook Trail between Pawling and Hopewell Junction.

On the Champlain Valley Trail, the Champlain On-Road Bike Path between Westport and Keeseville sees its elevation peak at 969 feet.

The Erie Canalway Trail is mostly flat as it follows canals and rivers, but the first trek in Buffalo on the Shoreline Trail reaches a maximum elevation of 630 feet.

Can I camp along the Empire State Trail?

The trail has a few campsites along the way. the The New York State Canal Corporation has designated camping areas at many of its locks along the Erie Canal and the Champlain Canal along the Erie Canal Trail portion, including the Waterford Canal Visitor Center, Fort Plain, Utica, New London and Schuylerville.

Additionally, public or private campsites are within 5 miles of the Empire State Trail route in many areas, requiring a short detour.

There are no public or private campgrounds located directly on the trail itself except for Creekview Campgrounds in Rosendale and Sylvan Lake Beach Park at Hopewell Junction.