LONDON (BRAIN) – Thanks to the Cooper family’s prominence in the automotive industry, its new range of e-bikes has generated free press around the world since its relaunch at the Cycle Show in London last week. The line of bikes is unlikely to be seen in the US, but it does feature an innovative hub motor that is worth noting.

BRAIN last wrote about the Cooper Bikes brand in 2012, when we caught up with it at the Eurobike show. Ten years later, the line is quite different. Now all Cooper bikes are electric and they are made in Germany by TechniBike GmbH, which licenses the Cooper family brand.

TechniBike sells bikes under its own name and recently added the youth brand Pyro Bikes and Cooper Bikes to its portfolio. TechniBike itself is a subsidiary of the Techniropaholding GmbH group of companies, which is involved in many industries.

John Cooper was a race car driver and the developer of the original Mini cars. The Cooper family licenses its name and the Mini brand to BMW for automobiles and retains the rights for other applications, such as bicycles, said Klaus Berchtenbreiter, international business development manager for TechniBike. TechniBike worked closely with the Cooper family to develop the line of bikes, he said. Mike and Charlie Cooper, John Cooper’s son and grandson, attended the relaunch at the Cycle Show.

“We have to fulfill a lot of obligations to make sure we don’t violate any rights (owned by BMW or the Cooper family),” Berchtenbreiter told BRAIN. “We are bound by very similar principles and the mindset established by John Cooper.”

Notably, the term “Mini” does not appear in the marketing of Cooper bicycles. Berchtenbreiter said the range of bikes is true to the vision of John Cooper, which he says is “a very British brand, very well designed and sold at an affordable price. That’s what he decided to do with the Mini Cooper.

Cooper has unveiled four models that will cost between £2,100 and $2,500 (about $2,600-$3,100). All have chromoly frames. Three models are flat-bar city bikes while a fourth, called Randonneur, has drop bars. A Cooper Bikes flyer on the new line shows a small-wheeled e-bike model, called UTY, which it says is “coming soon.”

“I’m an accountant by trade,” says Berchtenbreiter. “Honestly, I haven’t found a model that would allow us to sell the bikes affordably and allow a middleman and still make money for us.”

No wires, no charging?

The future UTY appears to use a mid-drive motor with a downtube-mounted battery.

However, the four initial models feature the Bike+ rear hub of the Italian company Zehus. The engine features prominently in Cooper’s promotions for the bike line. 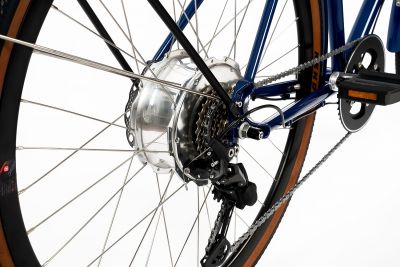 Bike+ batteries are tucked inside the hub, eliminating any wiring connecting it to a battery mounted elsewhere on the bike. Its functions and settings are controlled by a mobile app or an optional wireless handlebar remote (Cooper does not specify remote on any of its models).

Besides the clean, cordless looks, the engine’s standout feature is regenerative braking, which theoretically creates an e-bike that never needs to be plugged in, like a hybrid car.

In reality, an electrical cord is included (it connects to the right end of the rear axle) and getting “infinite” mileage from the motor depends on its settings and usage.

The hub battery charges when the rider pedals backwards to brake, and can also be set (with the phone app) to charge while descending a hill or even while pedaling on the flat. The hub has a tilt sensor and can adjust its assist and battery regeneration depending on whether the bike is climbing or descending.

Regenerative braking is not intended to be the only brake on the bike: the hubs are compatible with disc, drum or rim brakes. Cooper offers a bike model with a single-speed Gates CDX belt drive. The other models have 7-speed Microshift derailleur drivetrains.

Hub battery size and motor output are modest compared to some e-bikes: the battery is 30v, 173Wh and the motor is 250 watts, generating around 40Nm of torque, enough to provide light assistance in city. The motor’s range is said to be 50 to 75 kilometers (31 to 46 miles) depending on power settings, or “unlimited” in its autonomous mode.

Zehus hub motors are designed around European pedal assist standards limiting the assist speed to 25 km/h (15.5 mph). This is why hubs are rarely seen in the United States and contributed to Cooper’s decision not to sell their bikes in the United States initially. Due to the specific stall requirements needed to manage the hub’s braking torque and align its tilt sensors, the hub is not sold for aftermarket use.

The Zehus hub has been around for several years; a first version appeared at Interbike 2014 on some bikes. In 2016, Vittoria Industries invested in the company. In 2019, Zehus was acquired by Eldor Groupa 50-year-old supplier to the automotive industry based in Como, Italy.

About 30 bicycle brands, most of which are unavailable in the United States, use hubs from Milan-based Zehus. Berchtenbreiter said Cooper is “probably the biggest customer” for the hubs.

‘Are e-bikes allowed?’ 5 things to know about the Empire State Trail