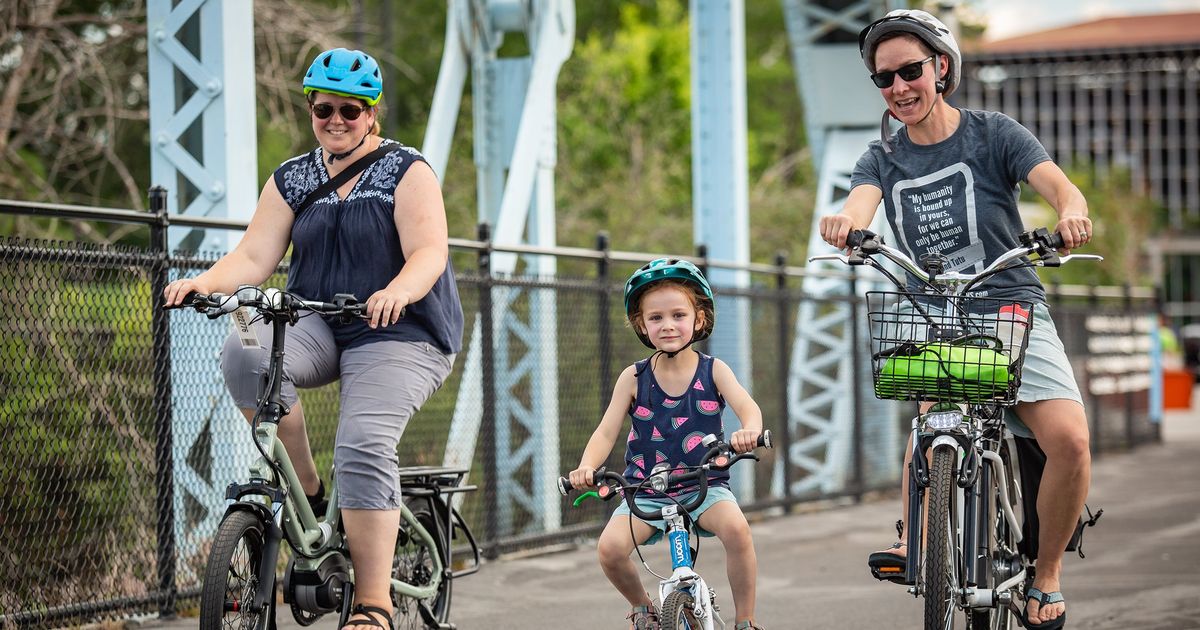 It only took a few pedal strokes on my friend’s e-bike for me to figure out what it’s all about.

For years I had thumbed my nose at e-bikes as a sort of crutch for people who can’t push themselves to the limit.

Turns out I had missed the whole point: because you use less power, e-bikes will keep you in the saddle longer and won’t have you feeling completely exhausted when the ride is over.

And isn’t that what it’s all about: spending more time doing what you love?

Marvin Heffley, who works at Wheel Sport on South Hill, has been a mountain biker for years. But the fun was limited by the number of times he could climb the hill.

“Mountain biking is a pretty tough sport, climbing hills over and over again,” Heffley said. “It kicks your ass.”

“Now I can do five or six times what I could only do twice,” Heffley said. “It made mountain biking a lot more fun.” It made sense for the same reason alpine skiers buy lift tickets; you can climb the mountain for free, but why?

It’s the same for the road bike. Now a 20 mile ride can turn into 50 with less wear and tear on muscles and joints.

Sales of bicycles and e-bikes were on the rise even before the pandemic left people at home. Home training apps such as Peleton have gone up and down over the past two years; in fact, so have sales of standard bikes, which actually fell slightly in 2021.

According to a study published earlier this year by Precedence Research, the global e-bike market was valued at around $17.5 billion in 2021. This is expected to reach $41 billion by the end of the decade, as more more people see them as a flexible and environmentally friendly mode of transport and a viable alternative to motorized transport.

There isn’t just one demographic that rides an e-bike. They are aimed at young people who do not want a car; older people who want a little help to keep cycling; commuters who don’t want to sweat on the way to work.

The trends are mirrored at Wheel Sport South, where last year 40% of sales were e-bikes. It’s a safe bet that more of their customers will cycle to work downtown – pedaling down the hill on their own and getting extra help on the way back.

As they say at national manufacturer Specialized Bicycles: “It’s you, only faster.”

Inside Wheel Sport South last Wednesday, about two dozen e-bikes lined up, waiting or customers. Based on recent history, they won’t last long, even at the average price of $3,000-$4,000. High-end models cost nearly $10,000.

Less expensive models cost between $600 and $800 at big box stores, although they are not recommended by most experts.

“Dip below the $1,000 price point and e-bikes start to get sketchy,” according to an article published last month by bicycling.com.

Most batteries have a range of around 40 miles and are attached to the frame of the bike. To charge, use a key to unlock it from the frame, then plug it into a standard wall outlet.

Class 1 includes pedal-assist bicycles, which power the electric motor when your foot applies pressure to the pedal. There’s no throttle to get the bike going; the electric part only works when the rider is pedaling, and the e-assist cuts out at speeds over 20 mph.

Class 2 bikes also have an electric motor that runs up to 20 mph, either while the rider is pedaling (thanks to pedal assist) or with electric propulsion alone via throttle control.

Class 3 limits an e-bike’s pedal assist to 28 mph and requires a speedometer.

Likewise, the engines come in three variants. Mid-drive motors are positioned in the center of the frame, where you would normally find the bottom bracket.

Hub e-bikes have motors in the front or rear hub, and there are two types of hub motors.

Direct-drive hub motors, except for their bearings, have no moving parts: the motor simply spins around the axle, which is attached to the frame dropout. Geared hub motors use a series of planetary gears to lower the motor’s rpm and increase its torque output.

People are turning to e-bikes to counter rising gas prices