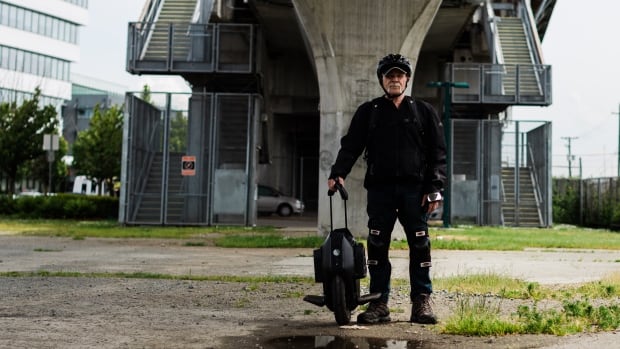 Get around on e-bikes, electric unicycles are gaining traction on the streets of Vancouver

A few years ago, all Tom Bramble wanted was to solve his very Vancouver commuter problem.

Cycling to his downtown office made the most sense, but the odds that his bike would still be where he locked it at the end of the workday weren’t good.

“I was afraid of buying a bike and having it stolen after being chained to a lamp post or missing parts,” he said. “So I started exploring the options and came across electric unicycles.”

Electric unicycles – EUC for short – are compact, battery-rechargeable, single-wheeled devices that are small enough to carry and keep on a desk. Unlike an e-scooter or e-bike, there are no handlebars. The rider sits astride the steering wheel on flip-up footrests and propels it forward and steers by subtly shifting their body weight, like a Segway.

“It seemed like such an elegant solution to my problem,” Bramble said. “It’s a briefcase that can get you hundreds of miles for just pennies. And it’s super fun.”

EUCs, short for electric unicycles, are growing in popularity

Tony Davies was also an early adopter of EUC, although at 73 he is not typical of riders who tend to be younger. The retired dispatch manager of a taxi company bought his first ‘wheel’ six years ago and has upgraded it a few times since. He says riding is like freedom.

Road trip to Whistler not recommended

Last fall, Davies took his new EUC for testing on the Sea to Sky highway, covering the 110 kilometer distance between Horseshoe Bay and Whistler on a single charge. Although he escaped unscathed, it’s not an adventure he would recommend to others.

“Halfway through, I thought, that’s really stupid,” he laughed. “What was scary was the cars; they’re getting so close to you. And then you go over the undulating part that warns drivers of the cycle lane, but [the bumps] spread out into the bike lane…so that wasn’t too cool.”

EUCs are not street legal, but are allowed on Vancouver bike lanes under a provincial pilot program to open up the rules for electric scooters and other micro-mobility devices.

Bramble ended up turning his eureka moment all those years ago into a side hustle, launching the Vancouver Electric Unicycles online store in 2016.

The first year, it only sold 15 units. Today, with growing awareness of decarbonization and electric mobility, it moves “several hundred” EUCs per year.

“My friends laughed at me”

“When I started selling them, most of my friends laughed at me,” he said. “But I think [EUCs] begin to turn the corner. And especially with COVID, people have started looking for alternative transportation. They want something greener.”

Prices range from around $600 to several thousand dollars, and full safety gear is advised. Battery range varies between 50 and 150 kilometers per charge, depending on the model. Some high-end units are capable of going over 60 kilometers per hour.

Of course, driving that fast is not advisable. Davies says he rarely goes over 20 kilometers per hour and always wears protective gear, including a helmet and a mirror strapped to his wrist.

Like any micro-mobility device, there is a learning curve to mastering an electric unicycle and newcomers should be prepared to practice before venturing out onto the city streets.

“I would say most people can learn to ride in two hours, at most half a day. It seems precarious at first, but it gets easier,” Bramble said. “Once you get used to it, the walk is incredibly slow.”