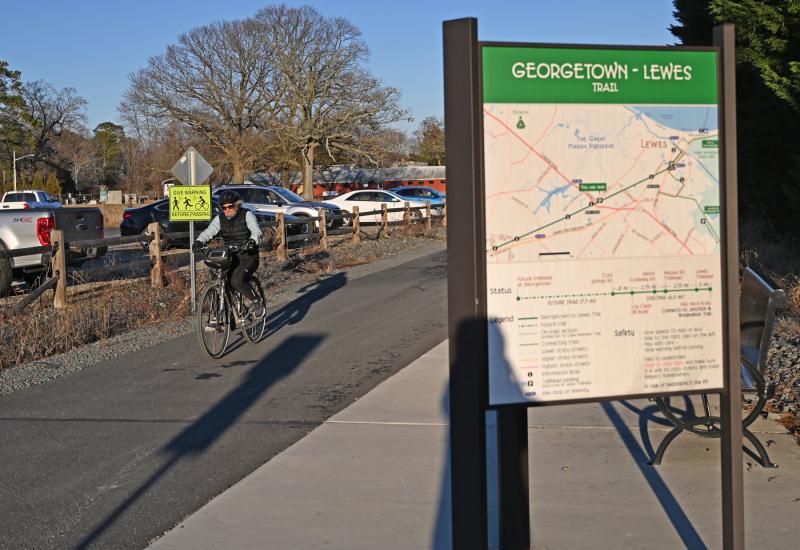 A Lewes committee is discussing how to deal with the proliferation of e-bikes on local trails.

The city’s Bicycle and Pedestrian Advisory Committee has yet to take a position on the matter, but the group is considering what action is needed, if any.

Councilor Tim Ritzert said enforcing any limitations or restrictions could be difficult.

“I think it’s difficult for the city to have rules that are different from the rules that are used on the county portion of the trails,” he said. “I think it would be very onerous for us to enforce and regulate.”

He recommended the city discuss creating uniform rules with other jurisdictions such as the City of Rehoboth Beach and Sussex County.

Ritzert noted that the issue is already addressed somewhat in a memorandum of understanding with the Delaware Department of Transportation regarding the city’s maintenance of the Lewes-to-Georgetown Trail. In it it is stated that motorized vehicles are prohibited from using the trail and the intended use of the trail is for cycling at low speeds of approximately 10 mph.

Deputy Mayor Andrew Williams said this conflicts with signage along the trail near Old World Breads in Nassau, where the fine print says the speed limit is 12 mph.

Committee member Robert Fischer said the MOU also conflicts with Delaware’s code, which defines bicycles as two- or three-wheeled vehicles with fully operable pedals and an electric motor under 750 watts or 1 horsepower with a top speed of 20 mph.

Fortunately, he said, there is a bill in the General Assembly that could clarify the whole situation. HB 19 was introduced in the House in December 2020 and received a unanimous vote in April 2021. It has been reviewed by the Senate Transportation Committee and is still awaiting a vote in the Senate.

The bill would allow local authorities and state agencies to ban the use of any class of e-bikes on trails if, after notice and hearing, the authority believes the restriction is necessary for safety reasons. .

The city’s bicycle and pedestrian committee plans to contact local lawmakers to find out if the bill is progressing.

Lewes is working on creating a low-stress bike path

The Bike and Pedestrian Committee is working to establish a low-stress bike loop throughout the city.

The city received a $12,500 grant from the Delaware Bicycle Council for the project, which is expected to be a 3.7-mile loop.

The bike path begins at the Lewes Public Library and follows the Lewes-to-Georgetown Trail to Devries Circle. Cyclists cross Savannah Road to join Sussex Drive and head towards the Highland Acres development, where they take a new path to the community of Mariner’s Retreat. From there, runners follow Seagull Drive towards New Road. They stay in the Reserves at Pilottown community until they connect to West Fourth Street, cross the Fourth Street Forest. Runners then turn briefly onto Burton Avenue before taking West Third Street past the Lewes Historical Society complex. Cyclists cross Savannah Road, take Kings Highway to Franklin Avenue, then return to the Lewes-to-Georgetown trail to the library.

The bike council grant will be used to add a curb to the Mariner’s Retreat development. The grant will not cover the full estimated cost of $15,000, so the city will cover the rest. The town is in talks with the developer of Mariner’s Retreat regarding widening the road from Seagull Drive to Sussex Drive, which is currently only a few feet wide.

The city is responsible for any wayfinding signage it adds, but these expenses have not yet been estimated.

The mayor and city council have not provided a fully executed agreement and work will not begin until then, but the project is expected to be completed within a year.

Pilot program could bring e-bikes and scooters to Overland Park