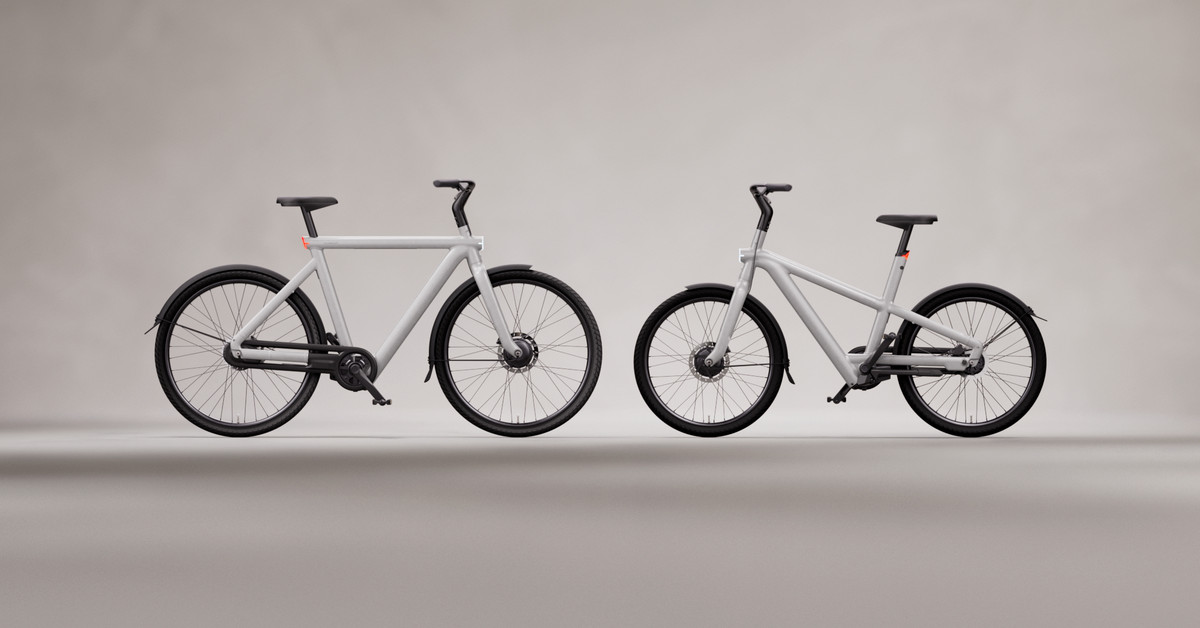 VanMoof has just announced its latest high-end electric bikes: the S5 full size with 27.5 inch wheels and the smaller A5 with 24-inch wheels and, in a first for the company, a step-through frame. They bring a host of refinements as VanMoof attempts to capitalize on growing demand for e-bikes from first-time buyers, even as it raises prices above the emotional $2,000 threshold.

“Only a handful of parts remain from our previous models, the S3 and X3,” VanMoof CEO Taco Carlier said in a statement. “Every detail, from the frame to the chipsets and sensors, has been engineered for the smoothest, most powerful ride ever.”

I had the opportunity to test near-finished engineering prototypes of the S5 and A5 at the company’s new headquarters in Amsterdam. The company has grown from around 250 people when the S3/X3 launched in 2020 to nearly 900 people today. Importantly, many of these new hires have joined the support and engineering teams in pursuit of VanMoof’s goal of bringing 10 million riders on its e-bikes by 2026, while avoiding a repeat of the missteps that plagued the early days of the S3/X3. launch.

One of the biggest changes to the S5/A5 is the replacement of VanMoof’s iconic top tube shield with two lighted “Halo Rings” near the Bell and Boost buttons next to the left and right grips. According to the company, the lights make you more visible on the road and the new handlebar interface transmits real-time information such as battery life, speed, lockout status and more. to the driver, all without having to take your eyes off the road. before.

VanMoof knows the decision will be controversial. Sometimes you have to “kill your darlings,” Carlier said with a laugh during a Q&A with reporters last week, echoing the idiom that guides designers in distributing everything they do. find personally exciting but does not add value for the user.

If you want more info on your ride, you’re in luck: VanMoof has co-designed an optional phone holder with SP Connect and added a new USB-C 5V socket under the handlebars. This way you can keep your phone charged while the VanMoof app is open to a new dashboard view. Pricing and official reveal of the mount are yet to be determined.

Both bikes boast a top speed of 20 mph in the US and 25 km/h in Europe thanks to a reworked 250W “silent” fifth-generation front hub motor of custom VanMoof design, with a boost button which now provides slightly more torque (68 Nm) than before (59 Nm). Also new is a three-speed automatic transmission mated to a new torque sensor which is now standard in all regions. Combined, the S5 and A5 would offer a smoother ride than the four-speed S3 and X3 e-bikes.

While previous VanMoof S-series bikes were criticized for being too tall for many riders, the S5 frame height has been lowered by 5cm (2in) to accommodate riders 165cm (5ft, 5in) and more. The small A5 is aimed at riders as short as 155cm (5ft, 1in) and uses a more angled frame compared to the X3 it replaces, making it easier to pass through.

Another notable change was made to accommodate a redesigned ‘Click-On’ extended battery coming in ‘early summer’. The optional additional 463 Wh battery (pricing to come at launch) nearly doubles the capacity. It can power the motor directly (or charge the main battery) without all the messy cables and velcro found on the VanMoof PowerBank it replaces. It attaches to the S5 and A5 via a new “Lock Dock” mount that does not fit older VanMoof e-bikes.

Other changes include brighter front and rear lights that are now more visible from the sides, a new self-retracting pin on the integrated Kick Lock (no more rolling the bike after unlocking it), environmental sensors built-ins for air quality and temperature, better cable management, and improved location tracking using a combination of GPS and LTE-M (a type of low-power wide area network). Both bikes offer a variety of front and rear cargo options, including a heavy-duty rear rack for the S5 and A5 that can carry up to 27 kg (nearly 60 pounds). Features like Apple’s built-in Find My network, stolen recovery, and built-in alarm carry over from previous generations.

The S5 and A5 are only available in gray at launch.

In my brief testing with the prototypes, I can confirm that the S5’s slightly smaller wheels and lower overall frame height make it noticeably easier to ride than VanMoof’s notoriously tall S-series bikes. The smaller A5 is much easier to access thanks to the new step-through design that improves on the upright X3 frame it replaces. I can’t directly comment on the much-vaunted improved “readability” since I was testing non-production firmware on a short test track. I hope, however, that the expedition bikes maintain the power, smooth shifts and quick starts (assisted by pressing the Boost button) that I got from stomping the pedals on the prototypes.

The jury is still out on the benefits of the Halo Ring interface. On my left side I saw a solid ring of static white lights as I rode, while the opposite ring moved up and down without an obvious 1:1 correlation to what I was doing – did it show power, speed or something else? Also, when should I use the new secondary buttons below the boost and bell buttons? VanMoof tells me the new multi-function buttons will be used to control the Halo Ring functionality, enter a password to unlock the bike, and switch between the four pedal-assisted power levels. None of this was immediately obvious despite VanMoof’s hope that novice drivers wouldn’t need to consult a manual. In all honesty, I only rode the bike for five minutes and even the old VanMoof interface required some training.

Unfortunately, VanMoof, like nearly every other e-bike maker, has been forced to raise prices in the face of chip shortages and skyrocketing transportation costs. The S5 and A5 can be ordered today for $2,998 / €2,498 with deliveries starting in July – that’s well above the current $2,448 / €2,348 price of the S3 / X3, and well above their $1,998 / €1,998 launch price from just two years ago. And if anything, those prices will go up over time, not down, Carlier said when asked by The edge.

Even at those higher prices, Carlier says the company is gearing up to produce about “15 times” more S5 and A5 bikes at its Taipei factory than its pre-pandemic production rate. Although Carlier doesn’t give an exact figure (he says it’s “less than 100,000” per month), the company needs to significantly increase production to reach its five-year goal of 10 million VanMoof passengers – far more than the around 200,000. runners it currently has after more than a decade of operation.

And yes, for those paying attention, VanMoof is skipping the “S4” generation of bikes with its name. If you ask Job Stehmann, head of product design, he’ll echo his CEO and say he deserves to jump a number because the bike is a major step up from the S3. (Carlier conceded during Q&A that four is also an unlucky number in Asia.) It’s also worth noting that VanMoof released a number of updates to the S3/X3 bikes in early 2021, in addition to small improvements made throughout 2020, never incrementing model numbers.

VanMoof is good at generating hype for its hugely popular e-bikes. We’ll see if the new S5 and A5 models are worthy as soon as we can do a thorough review. Here’s hoping the Carlier brothers can apply all the lessons learned over the past couple of years by shipping a better, defect-free product with no support issues to justify those higher prices.