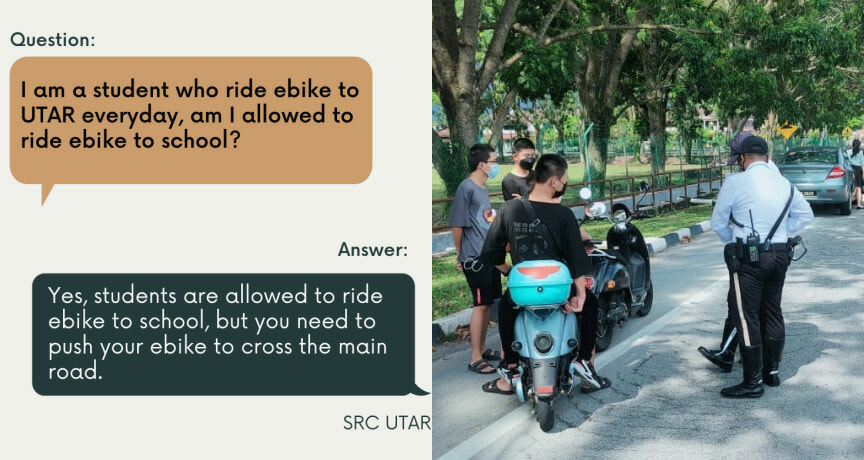 According to Kampar’s IPD Traffic Enforcement division, vehicles such as personal mobility devices and personal mobility aids are prohibited on the road. The penalty does not include more than a fine of RM2000 or a prison term of up to 6 months.

“At this time, Kampar IPD Traffic Enforcement Division will conduct a week-long advocacy in Kampar District to educate and raise public awareness on the dangers of using micro-mobility vehicles on the road. Enforcement measures will begin to be implemented after this period,” said the statement posted on May 1, 2022 said.

Along with the announcement, most university students are unsure whether they can still use their e-bikes in the living area or inside campus. A particular response from the Students Representative Council (SRC) of Universiti Tunku Abdul Rahman (UTAR) Kampar Campus has left students with even more questions.

According to the infographic released by the SRC UTAR Kampar campus on May 5, students are allowed to go to school by e-bike, but they must “push the e-bike to cross the main road”. Additionally, when responding to the question of whether students can cycle on the main road if the e-bike includes pedals, the SRC replied, “No, as long as the battery and motor are still on your e-bike. , this is considered illegal. ”.

Many students find the answer ridiculous, and most comments also criticized the board for not dealing with the issue professionally.

The following day, the council issued a statement apologize for his neglect to clarify the matter. To prevent students from violating the rules and regulations issued by the transportation division, local authorities advised students to either manually move the e-bikes to cross the main road or remove the battery and motor from the e-bike.

So what do you think of the whole situation? Share your thoughts with us in the comments!

Planetarium, e-bikes and free comics today in Colorado Springs (May 7) | Jill from Colorado

Bezior XF001 and XF200 electric bikes are heavily discounted, take advantage of special offers up to €100 off